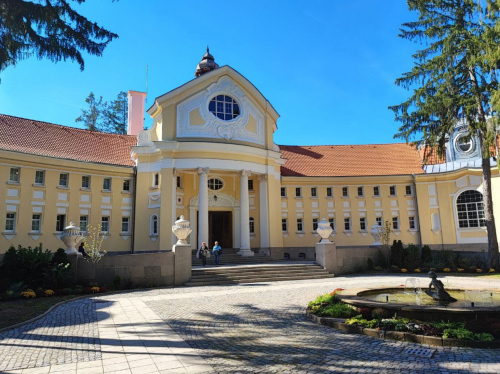 In 1907, on the initiative of the Minister of Agriculture and Trade - doctor Nikola Genadiev, the construction of the Great Bath in "Bankya" began. The author of the project is the Munich professor Artur Hoheder - official builder (nowadays this title is equivalent to chief architect) of the city of Munich, and the construction manager - architect Neno Neshev. Entrepreneurs are the Savovi brothers from Sofia and banker Nikola Rangelov.

Construction continued for three years, and the grand opening was in 1911. Then began the shaping of the grounds around the bathhouse into a beautiful park. Later, the park was expanded with additional landscaped spaces in which exotic tree species were planted. Engineer Dimitar Hristov is responsible for this paradise. He not only plans the terrain, builds it, but also annually adds plantings with species from the Sofia and European botanical gardens.

Nearly 1 million gold leva were invested in the construction of the bath. It is the first medical building in our country, adapted to the modern technical facilities of its time.

In the past, the bath was used by almost all Bulgarian public figures, as well as by the kings. The building stands at the bottom of a large and artistically decorated park with colorful figures and beds, cut through the middle by the small creek ... and crossed by many shady avenues, with comfortable benches for resting.

The total area of ​​the building is 1700 sq.m., it is made up of a rectangle with two protruding wings at both ends, thus forming a semicircle. In the middle of the building is the central entrance. It is an impressive portal with tall granite columns on the sides.

Today, the bathroom in "Bankya" has been restored tile by tile and fascinates with its beauty and dignity.